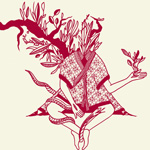 Trip out for just the price of 2 Ping Pong balls!
Or an interesting past time when you got too much time on your hands, it
beats watching TV anyways.

Ganzfeld means "whole field" in the german language and is a method to
realize a state of sensoral deprevation. It is acquired by having a
complete uniform visual field before the eyes and a uniform constant
sound playing on the background for a certain time.
It is most often done with 2 ping pong ball halves that cover the eyes,
a red light and a white noise sound source.

What happens in the Ganzfeld experiment?
If you glare into a featureless field of vision, a total emptyness,
your brain just starts to make up stuff after a while. The higher visual
cortex tries to search for something that isn't there and will, simply said,
shut off your vision.
The only thing left to interpetate for the higher visual cortex is NEURONAL
NOISE, scattered random electric fluctuations occuring in the neural pathways.
This usually occurs below the treshold of neuro action potential (Action
Potential is like the minimum voltage that has to occur across the nerve
fibre for some activity to occur). This is what apparently creates
hallucinations.

The Ganzfeld effect has been known since the dawn of man, it is speculated
by some that the images of prehistoric cave paintings were depictions of
ganzfeld induced hallucinations due to sensory deprevation deep inside the
caves.

Somewhere in the 1974 Charles Honorton was researching extra sensortial
powers and dreams at the Maimonides Medical Centre in New York.
In his experiments Test subjects were exposed to the Ganzfeld method
to get them into a state of sensory deprevation. As there was no information
to be processed for the brain it was believed that they could use their entire
mental power on psychokinesis. The test subjects in the ganzfeld state would
have to do certain telephatic and psychokinetic experiments.
Though Honorton claimed to have found proof for the existence of PSI in these
experiments it has never been repeated by any other studies and we should
take it with a littlebit of scepticism.

PSI powers or not,you can still trip out there is no scientific debate about
that.

- A white noise source (synthesizer, meditation sleep noise on youtube even
a radio will do tuned on a calm unfluctuating frequency of white noise)

- A pillow and fitness/yoga mat, a bed or couch will do fine too.
A red light source, you can put a red transparent plastic sheet before a
lamp or use a bright red screen.

Cut the ping pong balls in half, make sure you end up with 2 halves withouth any
pingpong ball company logo on it. Use a sharp knife or something, don't cut
your fingers off.

Put the two pingpong ball halves over your eyes, use some tape on the
sides so they stay put. Do not cover the ping pong balls with tape, its
vital the field of vision has only the white of the ping pong ball.

Lie down in a darkened room with only a red light source and nothing else.
Play the white noise in the background (You can also use headphones, it might
even be more effective). Keep your eyes open. After a while (15 - 20 minutes)
you will start to trip out.